The Many Names I Call My Husband

My beautiful wife, Olubukola, wrote a beautiful piece earlier today about me. I feel so proud reading it, and most importantly, more determined to finish strong, and to finish well. Let me let you read her pen.

What is in a name? This is a question some ask, sometimes with disdain, it is why they probably take for granted what they call others. Oh, but a name is key to who you are. It’s why we are even guaranteed new names when we cross over into eternity. Even Kunta Kinte knew this and fought so hard to keep his name till he got broken to accept ‘Toby’.

As my husband celebrates a milestone today, I will share some, just a few, of the names I call him…

Interestingly enough I can't quite remember how we got started on this name but it has stuck. Stuck so much that even in the midst of other people, I utter it without realizing it's not his first name. And that there may just be others present whose beloved call them that as well. But how easy it is to call him this, he has one of the sweetest hearts I know. Taking well after the one who first loved me and gave His life for me. O yes, this Sweet Heart of mine lays his 'life' for me too. Well he always tries to. He considers me and the children first all the time. And when I consider a colour to depict his heart, gold comes to mind and very easily too.

Ok so I’ve been privileged to share godly perspectives on marriage with intending couples, and one thing I keep bringing their attention to is the need to see that one as a partner in & for life. When you have tasted something great, being a witness or evangelist of that truth is easy. I have being blessed with an amazing partnership with my husband. Together we are a team. With God, we take on life with grace, and purpose with deliberateness. All the time we tackle issues and handle projects, back to back and side by side. My husband is indeed my partner in fulfilling purpose. He’s not intimidated to see me fly and will always be the one to challenge me and cheer me on. He’s aware of where I fall short (o yes the many gaps) but will always use wisdom, love and gentleness to support me. And again with ease I call him this.

This one actually makes me laugh. One, it's the local & traditional way we refer to folks here in Nigeria and it may seem strange that I would ever use it for him. But some names come so naturally. Many times uttered before one even thinks deep. But anyone who knows how my husband is with his Feyi, his best buddy, cannot agree any less. Even Feyi's teacher had to mention recently that he loves his dad. And sure their love is for real and here to stay. It's wonderful to know that Feyi's siblings aren't quite perturbed about it though. My husband has shown them as much love, care and friendship that has set them comfortable enough to enjoy the joys of Feyi and Baba Feyi's love. He's an amazing father. He’s their first role model and they cherish his presence. This is obvious by the way they shout with excitement whenever he returns home, and the way they cry when he's off for a trip...mmmmhhh....Baba Feyi.

LOL, Yes indeed. I also join the many who call him this. They are not the only ones who have enjoyed the ministry of an outstanding vessel of God. I have learnt the deep meaning of pastoring, deep yet simple. A shepherd. In my life my husband is the No1 Pastor. No minister comes before, with no intention to despise others I know  of course. But it’s an honor that my husband is PastorTea. There’s a tone I call it with though, especially when I want to tease him….PaaasstorTea, stressing the T there. Feel free to ask me to pronounce this when next we see, but this offer lasts just 7 days from this post…lol. But truly PastorTea is a leader, and shepherd. In our home, he is prophet and priest. One special privilege I have with him on this is sharing the learnings God pours out to us. He learns something at the Feet of Grace Himself and before another hears, he teaches me. He doesn’t just preach what He learns though. He exemplifies it. To top it up, he remains teachable despite. When I learn as well, he’s open to hear from me. And when I have reservations about something he’s into, he listens. PastorTea!!

Many strive for places of honor. Many are ambitious about opportunities, which in itself isn’t bad, but can be at the expense of others… but my husband has been of the few who are not just into being made Kings but are actually King Makers. Interestingly enough, some of us are yet to learn that King Makers don’t necessarily or ever take the lime light, but are always strong influencers. I have seen and heard of the many my husband has been used by God to help usher into positions of opportunities and blessings. If he believes in your potential or capacity, he will push for you. Not with aggression or violence, but with the grace bestowed upon him. It’s easy for many to wander, “but we know you can be this too like others we knew you with”, but in my heart I smile and sigh, because I understand the ministry of King Makers. They are positioned to make kings, to build leaders, to influence causes, especially those that bring glory to God. I call my husband, Maker of Kings….

Temitope, Sweetheart mi, my Purpose Partner, Baba Feyi aka Best Buddy, PastorTea of God, King Maker, King of my castle….I celebrate you. As you step gracefully and gallantly into this decade of reigning, may this mark a season of exploits for you. May your heart continue to love and fear God. May your understanding of your maker never grow stale, may His anointing on you remain fresh. May you remain a light in our generation that reflects God’s true light. May He prosper the works of your hands and grant you favour. May Kings come to your rising. May you fulfill purpose. With long life He will satisfy you and grant you His salvation. Happy 40th Birthday my Darling!!
Posted at 1:04 PM 1 comment: 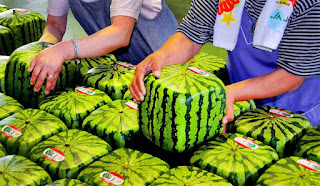 Several years ago, a colleague sent me an interesting piece while at work. It was indeed one of those write ups that left me with a smile, and a challenge at the same time. Please permit me to share with you (again, if you’ve ready it before). I am sure you will thank me after reading this piece.

Japanese grocery stores had a problem. They are much smaller than their US counterparts and therefore don't have room to waste. Watermelons, big and round, wasted a lot of space. Most people would simply tell the grocery stores that watermelons grow round and there is nothing that can be done about it. But some Japanese farmers took a different approach. "If the supermarkets want a space efficient watermelon,” they asked themselves, "How can we provide one?" It wasn't long before they invented the square watermelon. Yes, they did!

The solution to the problem of round watermelons wasn't nearly as difficult to solve for those who didn't assume the problem was impossible to begin with and simply asked how it could be done. It turns out that all you need to do is place them into a square box when they are growing and the watermelon will take on the shape of the box! That simple? Yes, it was that simple!

This made the grocery stores happy and had the added benefit that it was much easier and cost effective to ship the watermelons. Consumers also loved them because they took less space in their refrigerators which are much smaller than those in the US - which resulted in the growers being able to charge a premium price for them.

What does this have to do with anything besides square watermelons? There are a few lessons that you can take away from this story which will help you in all parts of your life. Here are a few of them:

The major problem was that most people had always seen round watermelons so they automatically assumed that square watermelons were impossible before even thinking about the question. Things that you have been doing a certain way your entire life have taken on the aura of the round watermelon and you likely don't even take the time to consider if there is another way to do it. Breaking yourself from assuming this way can greatly improve your overall life as you are constantly looking for new and better ways to do things.

The best way to tackle these assumptions is to question your habits. If you can make an effort to question the way you do things on a consistent basis, you will find that you can continually improve the way that you live your life. Forming habits when they have been well thought out is usually a positive thing, but most of us have adopted our habits from various people and places without even thinking about them.

When faced with a problem, be creative in looking for a solution. This often requires thinking outside the box. Most people who viewed this question likely thought they were being asked how they could genetically alter water melons to grow square which would be a much more difficult process to accomplish. By looking at the question from an alternative perspective, however, the solution was quite simple. Being creative and looking at things in different ways in all portions of your live will help you find solutions to many problems where others can't see them.

Look for a better way:

The square watermelon question was simply seeking a better and more convenient way to do something. The stores had flagged a problem they were having and asked if a solution was possible. It's impossible to find a better way if you are never asking the question in the first place. Always ask if there is a better way of doing the things that you do and constantly write down the things you wish you could do (but currently can't) since these are usually hints about steps you need to change. Get into the habit of asking yourself, "Is there a better way I could be doing this?" and you will find there often is.

If you begin with the notion that something is impossible, then it obviously will be for you. If, on the other hand, you decide to see if something is possible or not, you will find out through trial and error. I like the way a wise man puts it. He said “Impossibility only exists in the dictionary of fools”.

Apply the lessons from the square watermelons to areas in your life (work, finances, relationships, etc) and by consistently applying them, you may continuously improve all aspects of your life.

See you at the top.