Lessons From A Marathon 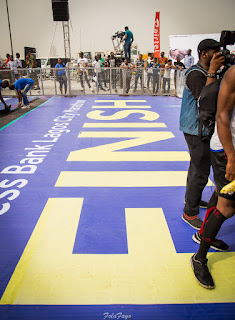 A couple of weeks ago, I had the rare privilege of covering the Lagos Marathon as a backup photographer. My wife was covering for a group and I tagged along. As usual, as I took photographs at different points, I also looked around to take in a few lessons. I have discovered that when you observe, you learn a lot. “To acquire knowledge, one must study; but to acquire wisdom, one must observe”, opined a wise man. I was able to draw some analogies between the marathon and a marriage relationship. Let me share with you some of my observations and learnings.

Yes. Some people had prepared for the marathon for months, while some others had never even completed a 5km race prior to that time. They just heard about the marathon and decided to participate. The same is true in a marriage. Some people come into it well prepared, while others just stumble into it. Those who took time to prepare had a much better chance of finishing compared to those who didn’t. For example, the Kenyan who won the race in 2.16.21hrs practices every single day of the week. A colleague of mine too, who finished quite early also runs 10km almost every single morning! You don’t win or finish a marathon by accident. A lot of work and preparation goes into it.

The same is true of a marriage. You are better off prepared. Of course, I know some people who finished the marathon without much preparation but it will take a lot of grit and determination – and of course, you’d be well behind others. In case you stumbled into marriage, or you were ill-prepared for it, the good news is this – you can still finish strong! You’d have a lot of learning to do, and a lot of catching up to do, but it is not a deterrent to finishing strong.

As I thought more about this, I believe that our generation owes it to the next generation to help them prepare well for marriage. Most in generations before us perhaps didn’t do a very good job at this in my opinion. And we seem to be doing exactly the same too, or even worse. The best gift we can give to those after are examples of marriages that works! A great preparation for a young man for instance is to see how his father loves, respects and treats his mother. If you are reading this and you are a father, you have a lot of work to do, believe me. You had better start now.

Over 20,000 athletes registered for the marathon but only about 10% of them made it to the finish line. Guess what? That’s about the success rate for marriages these days – I mean the percentage of those who truly lived happily ever after – not just staying together because "of the kids”, or "what would people say?" but really fulfilled. A lot of people started the marathon with energy, excitement and high hopes. There were lots of “wishes”. But hopes and wishes don’t win marathons. I have heard stories about people going into marriage relationship with excitement and high hopes. As important as these are, you need more to succeed in marriage – a lot more.

3. It takes strength and stamina to finish a marathon.

In the same way, it takes staying power to finish strong in marriage. By finishing strong, I mean that you are fulfilled, faithfully and happily married to 1 man/1 woman till death do you part. In today’s world, the chance that you would finish strong is just about 10%. There are many ambushes on the way to having a truly successful marriage. There are many odds against you. Not everyone who crossed the 10 meter mark (maybe equivalent to 10 years of marriage) made it to the end. Not everyone who reached the half way line finished. Marriage is like a marathon. You need stamina for it. You need to keep going even when you don’t feel like it – when your partner is getting under your skin and you are about to throw in the trowel; when things are not going exactly the way you had them planned;  even when the “weather” is not favourable.

4. Some were greatly influenced by others to finish

There is something that comes with running with a group of like-minded people. It gives you an unbelievable lift. It gives you encouragement. This is the reason why the geese fly in a V formation. When they do, they conserve a lot of energy, and just ride on the “corporate” energy of the formation. This works similarly in a marathon (albeit slightly different), as well as in marriage. The group we were covering gave us a brief that they were expecting about 7 people to hit the finish line. More than double that number finished! I believe it was because they ran together. There is a way that seeing someone else you know or practice with run, that encourages you to do the same. It pushes you to do a few more kilometers. A colleague of mine ran with his wife and his wife finished before him. He told me he didn’t even consider stopping, as long as his wife was in the race! How could he?

In marriage, you need positive influence also. You need to be in the company of those who are determined to finish strong. I am not talking about perfect people but people who have their eyes on the finish line. You need a lift every now and then, and “flying in formation” will help. Who are your friends? Those who beat up their wives and brag about extra marital affairs? Those who disrespect their husbands and run them down? Or those who talk about how to make things better? Whichever group you belong to, you will get a lift – wither positively or negatively.

5. The Water Stations were very helpful, even to the most athletic

During the marathon, the organizers made provisions for water stations every 2.5km to cater for dehydration. Nutritional drink stations were also available every 5km. It was a delight to watch people arrive at these stations, and refresh. Even the most athletic would stop by to take a drink, and pour much more on his/her head. These breaks were very well needed to finish strong. In marriage, we sometimes get weary. Even the best of marriages go through their dull moments. I believe that there are also water and nutritional stations to help marriages. A seminar together. A movie night without the kids. Reading a book together. Taking a vacation together. Praying together. Talking together. Just do whatever will refresh you both, and give you the energy to go a few more kilometers. Utilize the water breaks. Don’t just run past them.

As I write this, my prayer for every married person reading this, as I pray for myself, is this – May you finish strong, and leave behind the legacy of a strong finish to the coming generation!