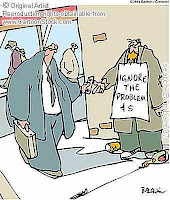 My wife shared with me an article she read sometimes last week. I am going to use the story in the article as a basis for my discourse today. This story is about a man who once upon a time was selling Hotdogs by the roadside. He was illiterate, so he never read newspapers. He was hard of hearing, so he never listened to the radio. His eyes were weak, so he never watched television. But enthusiastically, he sold lots of hotdogs. He was smart enough to offer some attractive schemes to increase his sales. His sales and profit went up. He ordered more and more raw material and buns and sold more. He recruited more supporting staff to serve more customers. He started offering home deliveries. Eventually he got himself a bigger and better stove. As his business was growing, the son, who had recently graduated from college, joined his father.

Then something strange happened. The son asked, "Dad, aren't you aware of the great recession that is coming our way?" The father replied, "No, but tell me about it." The son said, "The international situation is terrible. The domestic situation is even worse. We should be prepared for the coming bad times." The man thought that since his son had been to college, read the papers, listened to the radio and watched TV. He ought to know and his advice should not be taken lightly. So the next day onwards, the father cut down the his raw material order and buns, took down the colorful signboard, removed all the special schemes he was offering to the customers and was no longer as enthusiastic. He reduced his staff strength by giving layoffs. Very soon, fewer and fewer people bothered to stop at his Hotdog stand. And his sales started coming down rapidly and so did the profit. The father said to his son, "Son, you were right". "We are in the middle of a recession and crisis. I am glad you warned me ahead of time."

Moral of the Story: It's all in your MIND! And we actually FUEL this recession much more than we think.

What an interesting story. Does this story permit us to be ignorant of what is going on around us? Does it suggest that we care less about what is happening around the world and how it affects us? Is the morale behind the story that we shouldn’t believe global financial reports? I am not sure of that. What I will suggest is this-Do not be ignorant, but it is okay to ignore some of the negative news! Let me explain.

I believe strongly in the efficacy of God’s word. Before the world came, and its systems (including its financial system), God’s word already existed. Whenever God speak, it is done! His word is as powerful as himself. If God says a thing, it is more important than what anyone else says. His word is superior to the news! His word is superior to intelligence reports. There is a story in the Bible (God’s word), that typifies the type of time that we are in at the moment. There was a famine in Samaria. There was a financial meltdown. It was so bad that people were killing their children for food. Can you imagine that! People were confused. They ran to the king but he couldn’t help them. He told them in clear terms “ If God does not help you, then who am I to help you”. Amazing. He was in the same situation that our world leaders are in today. He didn’t just have a solution. In the midst of the crisis, God’s word came forth “ By this time tomorrow, a barley of wheat shall be sold for a shekel ”. Wow! That was against common sense. It was against all economic principles. The chief economic adviser to the King then said “ If the Lord shall make windows in heaven, might these things be?” True to God’s word, and against all economic projections, a barley was sold for a shekel, right at the gate of Samaria, the next day.

What’s my point here? It’s quite simple. Do not be ignorant of what is happening in the world financial sector. By all means, learn from it. Be wiser by learning from the mistakes that were made and the outcome. However, do not let it cripple you. Do not let it stop you from doing anything. In the light of God’s word, you can prosper even in famine. In the light of God’s word, you are not supposed to suffer from the heat of this season. A tree planted by the Rivers always bears its fruits in its season. There is a clear difference between being ignorant, and choosing to ignore. My counsel is that you should not be ignorant, but it’s okay to ignore

I came across some advises from Warren Buffet (one of the richest man in the world) on how to conduct yourself and your finances during this period. Guess what? Almost all the principles he stated were from God’s word! Let me share with you:

Hard work : All hard work bring a profit, but mere talk leads only to poverty.

Laziness : A sleeping lobster is carried away by the water current.

Earnings : Never depend on a single source of income. (At least make your investment's get you second earning)

Accounting : It's no use carrying an umbrella, if your shoes are leaking.

Auditing : Beware of little expenses; A small leak can sink a large ship.

Risk-taking : Never test the depth of the river with both feet.(Have an alternate plan ready )

Investment : Don't put all your eggs in one basket.

Don’t Be Ignorant; But you can choose to Ignore!