The Wisdom Of Christmas 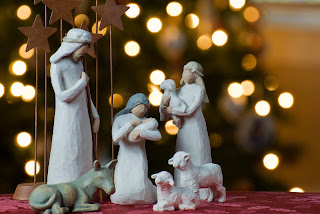 In the last couple of days, my wife and I have been sharing the Christmas story with the kids, as well as singing Christmas hymns with them on a daily basis. It's been an awesome experience. There's so much to talk about in the Christmas story that reducing Christmas to just another event in history or a national holiday would really be a shame! Talk about the angelic encounters. Think about the personal sacrifice of Mary (which lady would want her grand wedding cancelled?). Talk about the courage of Joseph (his friends must have thought he was either mad, or just plain stupid). Then, the wonderful shepherds who kept their flocks by night and who joined the Angels to sing, "Glory to God in the highest, peace and goodwill towards all men". Did you give some thoughts to the role played by the innkeeper (was he/she the one who eventually helped with the stable)?And the wise men (the Magis)? The Christmas story wouldn't be complete without them. Please permit me to beam the searchlight on the wise men this Christmas. Will you?

The story of the wise men is a story that is shrouded in mystery. What we know about them is as much as what we don’t know about them. They seem to just show up mysteriously – and just as mysteriously they are gone. But one thing I am certain about is that the number of wise men and women increases in every generation as people continue to seek the Christ.

Let me share with you 3 different lessons that we can glean from the story of these wisemen.

A wise man’s journey is one of FAITH

"Where is He who has been born King of the Jews? For we have seen His star in the East.” Mathew 2:2

What would prompt someone to leave the comfort of their homes to go on a dangerous journey? Romance? Maybe. Wealth? Most definitely. But faith? Hmmm – faith. “Where is He who has been born the King of the Jews?” What a probing question – there is no doubt in their language that He had been born – the question is “Where is He?” They had seen the star – the evidence was real – now where is He? They had faith that He was alive – that He existed – now all they needed to do was to find Him.

A wise man’s journey is one of WORSHIP.

“On coming to the house, they saw the child with his mother Mary, and they bowed down and worshiped him. Then they opened their treasures and presented him with gifts of gold, frankincense and myrrh” – Mathew 2:11

When the wise men came on their journey, it was for the purpose of worship. They were not looking for what to get, but what to give. Compare that with what happens in our churches today and you’d really wonder. These men simply wanted to offer themselves and their treasures to the King. They spontaneously bowed down and worshiped. There was nothing systemic about this worship. No music. No drums. No pianos. I am not sure there was any sound. Only real worship. May I ask you this question? When was the last time you truly worshiped Him?

Their worship led them to give out of their treasures to their King. They gave very significant gifts. But there is more to worship than gold, frankincense and myrrh. Worship involves sacrifice and what better sacrifice to offer to the Lord than offering him yourself – your life.

The wisest choice you could make, now or ever, is to follow the example of the Wise Men and worship the Lord Jesus Christ. Seek Him the way they sought Him. Bring to Him what they brought Him. Recognize who He is and say, "Lord, my wealth, my worship, my witness is yours. Jesus, You are Lord."

A wise man’s journey is one of CHANGE.

“And having been warned in a dream not to go back to Herod, they returned to their country by another route” Mathew 2:12

Isn’t it interesting that after they worshiped Jesus that they could not go back the same way that they had come? I find that to be a fact even today. Once you have met God you will never be the same. An encounter with God changes things – it changes you – doesn’t it? It’s always been that way.

When the wisemen encountered Christ, they were changed. When we encounter Christ also, he changes us! He transforms our lives. That’s the beauty of this season – when God sent his son, in human flesh, to transform us from the kingdom of the devil, to the kingdom of God. May you experience this change.

Are you a wise man?

On behalf of myself, my wife and entire family, I wish you all a Merry Christmas, and a Happy New year ahead.