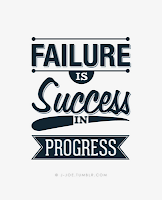 In just a few more weeks, or perhaps days, the year 2012 will come to an end. A couple of people are already taking stock of the year and wondering why they are behind on their dreams and on their plans. I bet you would have at least 1 thing on your list that you didn't succeed at. You are probably wondering why you failed at it, or what really happened. It becomes are bit more serious if it is an item you have been “carrying over” for a few years now. Do you feel a sense of failure…..yet again? You are not alone.

Most people who have become famous have invariably tasted failure early in their lives and careers, lending credence to a view that failure is the stepping-stone to success. Failure is a friend, not an enemy. Failure is a school teacher, not a taskmaster. See it as such and you will benefit immensely. I am always thrilled by the definition of success I saw somewhere a couple of years back. It says “Success is moving from one failure to another without losing enthusiasm!” Of a truth, the mistakes we make are not as important as the lessons we learn from them.


Success is moving from one failure to another without losing enthusiasm.

A number of years ago, an aspiring writer interviewed Thomas J. Watson, the President of IBM. Watson gave him this advice: “It’s not exactly my line, “he said, but would you like me to give you a formula for writing success? It’s quite simple, really. Double you rate of failure.” "You're making a common mistake," he said. "You're thinking of failure as the enemy of success. But it isn't at all. Failure is a teacher--a harsh one, perhaps, but the best. You say you have a desk full of rejected manuscripts? That's great! Every one of those manuscripts was rejected for a reason. Have you pulled them to pieces looking for that reason? That's what I have to do when an idea backfires or a sales program fails. You've got to put failure to work for you." He folded his napkin and put it beside his plate. "You can be discouraged by failure--or you can learn from it. So go ahead and make mistakes. Make all you can. Because, remember, that's where you'll find success. On the far side of failure."What a profound truth this is!

My point today is pretty simple (I hope) - don’t allow your failures or setbacks to discourage you. Failure needs not be fatal. When treated properly, failure can lead to great success and be a great learning experience. Henry Ford observed, "Failure is the opportunity to begin again more intelligently." Don't try to hide your mistakes, simply admit them, learn from them and grow from them. Remember that it's OK to fail! It is okay to make mistakes as long as you don’t make the same mistake twice. Failure is like a tuition you pay for you to succeed.


Failure is the opportunity to begin again more intelligently.

A couple of years after Watson gave the above advice to the young aspiring writer, Arthur Godson, he went on to become a well known author and editor. He later said of Watson’s advice, “Somewhere inside me, a basic attitude had shifted. A project turned down, a lot of rejected manuscripts –why, these are nothing to be ashamed of. They were rungs in a ladder- that was all”. May I encourage you to do the same? You may be closer to success than you can ever imagine. Giving up now will just make all efforts of yesteryear go down the drain! One more push might be all you need. One more contact might be all that is required. One more trial might be the breakthrough you have been waiting for. Just one more……..

I guess I have shared the story of Sir Edmund Hillary before. Let me share it again to drive this point home. Sir Edmund Hillary was the first man to climb Mount Everest. On May 29, 1953 he scaled the highest mountain then known to man-29,000 feet straight up. He was knighted for his efforts. He even made American Express card commercials because of it! However, until we read his book, High Adventure, we don't understand that Hillary had to grow into this success. You see, earlier in 1952 he had attempted to climb Mount Everest, but failed. A few weeks later a group in England asked him to address its members. Hillary walked on stage to a thunderous applause. The audience was recognizing an attempt at greatness, but Edmund Hillary saw himself as a failure. He moved away from the microphone and walked to the edge of the platform. He made a fist and pointed at a picture of the mountain. He said in a loud voice, "Mount Everest, you beat me the first time, but I'll beat you the next time because you've grown all you are going to grow... but I'm still growing!" A year later, he succeeded where he has failed.

I have learnt something about successful people. They don’t avoid mistakes; they handle it. Peter Drucker once said "The better a man is, the more mistakes he will make, for the more new things he will try. I would never promote into a top level job a man who was not making mistakes…otherwise he is sure to be mediocre."

Failure should be a teacher, not an undertaker. Failure isn’t bad if it doesn’t attack the heart. Success is alright if it doesn’t get to the head!

Make the best of the rest of the year my dear friends, and double your failure rate and then success would be guaranteed.
Posted at 1:21 PM No comments: