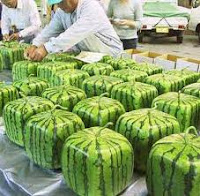 A couple of years ago, a colleague sent me an interesting piece. It changed the way I perceived things after that. Over time, I have seen this help me in different situations, especially difficult ones. It taught me, or would I say it reminded me of how to view problems and seeming impossibilities. I have shared this story before, and I perceive it is worth sharing again.

Japanese grocery stores had a problem. They are much smaller than their US counterparts and therefore don't have room to waste. Watermelons, big and round, wasted a lot of space. Most people would simply tell the grocery stores that watermelons grow round and there is nothing that can be done about it. But some Japanese farmers took a different approach. "If the supermarkets want a space efficient watermelon,” they asked themselves, "How can we provide one?" It wasn't long before they invented the square watermelon. Yes, they did!

The solution to the problem of round watermelons wasn't nearly as difficult to solve, for those who didn't assume the problem was impossible to begin with and simply asked how it could be done. It turns out that all you need to do is place them into a square box when they are growing and the watermelon will take on the shape of the box! That simple? Yes, it was that simple!


Impossibilities only exist in the dictionary of fools.

This made the grocery stores happy and had the added benefit that it was much easier and cost effective to ship the watermelons. Consumers also loved them because they took less space in their refrigerators which are much smaller than those in the US - which resulted in the growers being able to charge a premium price for them.

What does this have to do with anything besides square watermelons? There are a few lessons that you can take away from this story which will help you in all parts of your life. Here they are:

The major problem was that most people had always seen and used to round watermelons so they automatically assumed that square watermelons were impossible before even thinking about the question. Things that you have been doing a certain way your entire life have taken on the aura of the round watermelon and you are likely not to even take the time to consider if there is another way to do it. Breaking yourself from assuming this way can greatly improve your overall life as you are constantly looking for new and better ways to do things.

The best way to tackle these assumptions is to question your habits. If you can make an effort to question the way you do things on a regular basis, you will find that you can continually improve the way that you live your life. Forming habits when they have been well thought out is usually a positive thing, but most of us have adopted our habits from various people and places without even thinking about them.

When faced with a problem, be creative in looking for a solution. This often requires thinking outside the box. Most people who viewed this question probably thought they were being asked how they could genetically alter water melons to grow square which would be a much more difficult process to accomplish. By looking at the question from an alternative perspective, however, the solution was quite simple. Being creative and looking at things in different ways in all portions of your live will help you find solutions to many problems where others can't see them.

Look for a better way:

The square watermelon question was simply seeking a better and more convenient way to do something. The stores had flagged a problem they were having and asked if a solution was possible. It's impossible to find a better way if you are never asking the question in the first place. Always ask if there is a better way of doing the things that you do and constantly write down the things you wish you could do (but currently can't or aren't) since these are usually hints about steps you need to change. Get into the habit of asking yourself, "Is there a better way I could be doing this?" and you will find there often is.

If you begin with the notion that something is impossible, then it obviously will be for you. If, on the other hand, you decide to see if something is possible or not, you will find out through trial and error. I like the way a wise man puts it. He said “Impossibilities only exists in the dictionary of fools”. Don’t you think he is right?

Apply the lessons from the square watermelons to areas in your life (work, finances, relationships, etc), and with consistency you may continuously improve all aspects of your life.
Posted at 1:23 PM