The Price For Success Is Paid In Advance 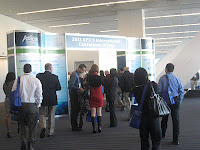 I had planned to attend the APICS 2011 conference since I saw the notes of the previous edition. Since then, I had been looking forward to personally being in the next edition. That plan was executed this past week. It was a great pleasure to mix with the best minds in the industry, who are leading the supply chains of their various companies, all around the globe, to gain competitive advantage. The conference was attended by about 2,000 people from 40 different countries, and would easily pass as the best professionally conference that I have ever attended. I had the pleasure of meeting lots of people on a 1:1 basis, including Rocky Bleiier (Legendary Pittsburgh Steeler and author of “Fighting Back”), Jim Donald (former CEO of Starbucks) and Lisa Hershman (CEO of Hammer and Company, and coauthor of “Faster, Cheaper and Better”). It was a blast!

We sure live in a world that is changing at an alarming rate. It is a world of the 3C’s – Accelerated Changes, Overwhelming Complexities and Intense Competition. You can practically start a global business on your laptop, right in your bedroom! Today, we face global competition, and customers can compare prices online. We are expected to meet customer demand and needs in an unpredictable world. The physical borders of economies are being broken and torn down at an alarming speed. Businesses, and individuals alike, need to get a competitive advantage to stay alive. In other to do this, companies and individuals need to follow the advice of Jerry Rice. Jerry Rice, the NFL Hall of Fame wide receiver and the man who has scored more touchdowns than anyone else, was famous for his work ethic. His workouts were legendary for their length and intensity. When asked why he worked so hard, he said, “Today I will do what others won’t, so tomorrow I can accomplish what others can’t. Think about that!

Great athletes are NOT great just because of some good genetics. Regardless of your genes and even though you cannot dictate what genes you are born with you do have a profound ability as individuals, as athletes, as people to affect how your genes are expressed. Your exercise training, nutrition, sleep, et.c . all play a role and influence what genes are expressed and which ones are suppressed. Athletes often think “ Well I would work out every day too if I was getting paid millions of dollars". When an athlete says and really believes this then they will NEVER "make it". Such an athlete has failed to realize that there is a price needed to be paid today, in order to be in the limelight tomorrow. You don’t achieve success before starting to pay the price. The price for success is paid in advance! What they do not understand is these athletes who are making money to play have been busting their butts off way before being a pro was even a thought. They love to train, love to compete and enjoy the journey of progressing at their sport.


The price for success is paid in advance!

An important principle of success in all walks of life and in all occupations is a willingness to " Go The Extra Mile "; which means the rendering of more and better service than that for which one is paid, and giving it in a positive mental attitude. Search wherever you will for a single sound argument against this principle and you will not find it, nor will you find a single instance of enduring success, which was not attained in part by its application.

As we see the global market changing more in the coming months and years, may I ask you honestly “What are you willing to do today, that other are not doing, in order to have tomorrow what others won’t have”?
Posted at 1:41 PM