Living On The Coke Side Of Life 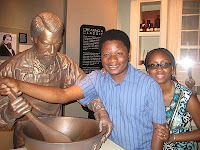 About this time last week, while on vacation in Atlanta Georgia, I had the opportunity of following the story of one of the world’s biggest and most popular brands. Several things interested me about this brand. This brand has travelled to more places in the world than the gospel of our Lord Jesus Christ. It’s in more hands than the Bible. It has penetrated into cities, towns and villages that the gospel has not dared! It is perhaps the largest consumer of glass in the world today. This brand is sustaining several glass factories and sugar plantations around the globe today – perhaps the largest consumer of both. I am sure you can guess the brand I am talking about now. I am talking about Coca-Cola. Coca Cola sells 1.4 billion servings each day. You could show someone a Coke can and they'll be able to tell you what it is, even if they live in Tokyo. No other brand is as recognizable as Coke is.


This brand has travelled to more places in the world than the gospel of our Lord Jesus Christ. It’s in more hands than the Bible.

A visit to the World of Coca-Cola Centre will be inspiring for anyone. You will practically see how this dream, and this product evolved to be a world brand and then you ask yourself – why not me; why not now? A friend of mine always put it in a nice way – if not now, when. If not me, then who!

It was in 1886, and in New York harbour,workers were constructing the Statue of Liberty. Eight hundred miles away, another great American symbol was about to be unveiled. Like many people who changed history, John Pemberton, a civil war veteran, and Atlanta pharmacist (yes, pharmacist!), was inspired by simple curiosity. He loved thinkering with medicinal formulas, and one afternoon, searching for a quick cure for headaches, he stirred up a fragmant, caramel-coulored liquid in a three-legged pot. When it was done, he carried it a few doors down to Jacob’s pharmacy. Here, the mixture was combined with carbonated water and sampled by customers who all agreed – this new drink was something special. So, Jacob’s pharmacy put it on sale for five cents a glass. Pemberton’s bookkeeper Frank Robinson named the mixture Coca-cola, and wrote it out in his discticnt script. To this day, Coca-cola is written in the same way.

About nine servings of the soft drink were sold each day. Sales for that first year added up to a total of about $50. The funny thing was that it cost John Pemberton over $70 in expanses, so the first year of sales were a loss.

Start with what you have

This is one of the prominent things in the Coca-Cola story. Sometimes, we are bugged down by trying to figure out all the tiny details before starting anything. We want to have everything ready to go before we take any step. Most times, we focus on what we don’t have rather than what we have. Pemberton started the Coca-Cola company with what he had – a formula. At that time, he didn’t have any business or marketing experience. He could have held back because of the many things he didn’t have but he didn’t.

There’s a story that explains this in a deeper way in God’s word. In II Kings 4: 1-7,there is an account of a woman that shows the power of starting with what you have. The woman, a widow, had a peculiar problem. He late husband left her and her sons huge debts to pay! And as far as she was concerned, she didn’t have the wherewithal to pay these debts. She did what was very logical to do – she ran to the man of God for help (since he husband was also a prophet when he was alive). I am sure she was expecting a display of a miracle. However, the man of God asked a very instructional question.

As far as she was concerned, she had nothing, except a little oil. Guess what? That little oil was enough to get what she wanted. This woman was focusing on what she didn’t have. The man of God drew her attention to what she had! What do you have? May I challenge you to start with that, and then see how you attract and get what you need.

Don’t be afraid to fail

In case you are not aware, Coca-Cola did not make any profit in the 1st year! First year sales closed at a loss. Infact, Pemberton, who invented the mixture, died 2.5 years after his discovery. However, the seed of greatness for this brand has been sown and just needed time to germinate.

One of the best lessons I ever learned was that it was OK to fail. It is OK to make mistakes. Failure has a wonderful way of teaching you lessons, sometimes very painful lessons, that you can use the next time you tackle a problem. You may not learn the lesson the first time, or the second, or fifth time, but eventually each failure will teach you something you can use later.

How did I learn this? By recognizing one crucial thing – no one starts off being the best at something. All the greats of anything did it through hard work, something you can read about in Malcolm Gladwell’s Outliers and his 10,000 hours idea (that to truly master something you need to spend 10,000 hours on it). And you know what? The first thousand hours were probably filled with failures.“Don’t be afraid to fail. Every successful person has failed at some time. Everybody that plays it safe, they’re never going to fail, but they’re never going to be a big success,” said Peter Kim, Hudson Jeans CEO, requoted from a Los Angeles Times article.