It's Good To Work Hard. It's Great To Work Smart 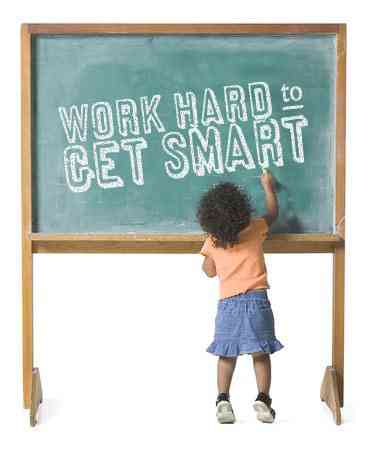 I am one of the last persons in the world who would tell you not to work hard. I know that hard work is the only substitute to a hard life. Hard work makes the commonest chance golden. However, it worth reminding you that working hard must also be tempered by working smart, or you might just be wasting a load of effort. There is a reason why we were born with both muscles and brains. We should use both…..and definitely not in proportional ratios.


There is a reason why we were born with both muscles and brains. We should use both…

Consider the story of two lumberjacks in a tree-cutting contest. Both were strong and determined, hoping to win the prize. But one was hardworking and ambitious, chopping down every tree in his path at the fastest pace possible, while the other appeared to be a little more laid back, methodically felling trees and pacing himself. The go-getter worked all day, skipping his lunch break, expecting that his superior effort would be rewarded. His opponent, however, took an hour-long lunch, and then resumed his steady pace. In the end, the eager beaver was dismayed to lose to his "lazier" competition. Thinking he deserved to win after his hard work, he finally approached his opponent and said, "I just don't understand. I worked longer and harder than you, and went hungry to get ahead. You took a break, and yet you still won. It just doesn't seem fair. Where did I go wrong?" The winner responded, "While I was taking my lunch break, I was sharpening my ax."

Hard work will always pay off; smart work will pay better. Remember back in school, there were the people who studied all day and all night, but still struggled to pass exams?(I hope you are not one of them).Then there were the people who studied hard but also found time for a game of basketball (or time to attend fellowship) and still aced every test and exam. Both groups studied the same material, attended the same lectures, were taught by the same professors, and took the same test. Was the second group just that much more brilliant? Maybe, but my money's on the way they approached their material and learned how to study. If they were smart, they applied those same principles after graduation: work hard, but also work smart.

That's a lesson that can be learned by even young children. A little girl visiting a watermelon farm asked the farmer how much a large watermelon cost. "Three dollars," he told her. "But I only have thirty cents," the little girl said. The farmer looked around his field, and feeling sorry for the little girl, pointed at a small watermelon and said, "That one's thirty cents." "Oh good," she replied as she paid him, "Just leave it on the vine and I'll be back in a month to get it."

Call it creativity, call it ingenuity, call it whatever: I call it using your head. Knowing how to analyze a situation and how to execute an action plan will put you ahead of the game in the long run. There's nothing wrong with having a leg up on your competition - it's how you win. The combination of hard work and smart work is the formula for success. Think about what needs to be done, and then think again about the best way to accomplish it - not necessarily the way you've always done it, or the fastest way, and certainly not the hardest way. Never make work harder than it has to be. That's just a colossal waste of time.

Perhaps the ingenuity award goes to the fellow who came to the Canadian border on his motorcycle, carrying two saddlebags strapped across his seat. The border guards asked the obvious question, "What's in your saddlebags?" "Rocks," was the reply. So the guards emptied the bags to check out his story. Sure enough, all they found were rocks. So they sent him on his way. The next week, the same fellow came to the crossing, again on a motorcycle, again with the same payload. The guards checked once again, and found more rocks. Off he went. The scene repeated itself weekly for several months, until finally the guards couldn't stand it any longer. "We know you are smuggling something across the border, but every time we inspect your saddlebags we find only rocks. Please tell us what you are up to, and we promise not to turn you in." "Well," the fellow replied, "It's really very simple. I'm smuggling stolen motorcycles."

Moral of the story: It's good to work hard. It's great to work smart. But it's best to work hard and smart.
Posted at 10:48 AM No comments:

It's Alright To Dream Again.


Early on Sunday morning, while it was still dark, Mary Madgalene came to the tomb and found that the stone was rolled aside from the entrance. John 20:1 – Living Bible

It’s been dark because of Peter’s denial. He had denied his Lord and Master on three different occasions. On one occasion, he swore that he never knew him when confronted by a teenage girl. It was still dark.

It’s been dark because of the disciple’s betrayal. No one except John had the courage to travel with Jesus all the way. They were all scattered abroad. They ran for their dear lives. Permit me to say that it was not only Judas who betrayed his Lord. Majority of the disciples did. They fled when Jesus needed them most. It was still dark.


Permit me to say that it was not only Judas who betrayed his Lord. Majority of the disciples did.

It’s been dark because of Pilate’s cowardice. Read the account of Jesus’ betrayal and you’ll be amazed at the cowardice of a whole King. His name Pilate means close pressed or firm. You will agree with me that he was anything but firm on this particular day. He was been controlled by the crowd. He yielded to their wish even though he was dead sure it was a wrong thing to do. It was still dark.

It’s been dark because of Christ’s anguish. He must have gone through so much pain. How about a slap from one of the military officers after blindfolding him? What about the crown of thorn placed on his head? What about the heavy wood he had to carry most of the way down to Golgotha? What about the stripes that had to go round his exposed body? Consider the spiting, cursing and humiliation. What about the spikes that went through the hands that healed the sick? Oh, what anguish? No wonder it was still dark!

It’s been dark because of Satan’s glee. There was a party in hell over the events on Friday. As far as the devil and his agents were concerned, they were in charge now. The Son of God was dead and it was their time. It was still dark.

All these happened since Friday but it was still dark on Sunday morning. The only ember of light this morning was a band of women standing at a distance from the grave. They were the last to leave Calvary and the first to arrive at the grave. However, this morning promises nothing except an encounter with a corpse. They never imagined this could be the 1st Easter. They are not hoping the grave will be vacant. There was a time they dared to dream such dreams but not now. It’s too late for the incredible. The feet that walked on water have been pierced. The hands that cleansed lepers have been stilled. There noble aspirations had been spiked to yesterday’s cross. Their dreams appear dead and long forgotten.

Have you ever got to a junction like this in your life? A junction where everything seems dark? Where there seems to be no way forward? Where everything just appear gloomy? Before you give up and throw in the trowel, can you please follow me and see what happens afterwards?

Though it’s been dark hitherto, a miracle was just around the corner this Sunday morning. A double surprise was waiting for these women in quick succession!

First, the stone of the sepulcher had been rolled away! They must have been thinking of how to gain access to the sepulcher on their way there. But to their surprise, the stone was no longer there. As if that was not enough, they couldn’t find the body of Jesus in the grave again. While still wondering what could have happened, an angel explained to them that Jesus was risen as it’s been written! “You cannot be looking for the living among the dead”, the angel said. Suddenly, the darkness since Friday began to lift! A fresh hope sprang up in these women and later in the minds of the disciples.

After all the darkness, light shone. The greater the darkness, the brighter the glory of light. No wonder it was a special Sunday morning, one that we still celebrate till today. It was a morning with a great message of hope. That resurrection morning had a great message – It is Alright to Dream Again! Yes it is. The resurrection of Christ gives you this opportunity to dream again!